Golf Digest, in its May 2005 issue, ranked four courses on the Brainerd Golf Trail — The Classic at Madden’s, Deacon’s Lodge, the Legacy Courses at Cragun’s (Bobby’s) and Golden Eagle Golf Club – among its 20 Best Courses in Minnesota (public and private).

The four courses are among the 18 on the Trail that combine for 300 holes of golf and 20 lodging properties all within a 45-minute drive of each other. The Brainerd Golf Trail previously was ranked 41st in Golf Digest’s “Top 50 Golf Destinations in the World.”

“I’ve played 20 of Golf Digest’s top 100 public courses, including seven of the top 16, and I can honestly say that the Brainerd Golf Trail courses rank with the best in the country,” said Gregg Wong, the former long-time golf writer with the St. Paul Pioneer Press. “And in terms of value, I can tell you that if those courses were in one of the hotbeds of golf like Arizona, Florida or the Carolinas, you’d pay twice as much. Midwest golfers are getting great golf courses at a great price compared with most of the courses on the top-100 list.”

In Golf Digest’s list of the 20 best courses in Minnesota, there were eight public courses. Four of those courses are on the Brainerd Golf Trail. The Classic is No. 2 (8th overall), Deacon’s Lodge is No. 3 ( 9th overall), Dutch’s Legacy is No. 7 (19th overall) and Golden Eagle is No. 8 (20th overall). The latter two made Golf Digest’s Best in State ratings for the first time.

Interestingly, two of the courses were designed by big-name, nationally known architects and two were designed by local talents. The Classic was designed by its long-time superintendent, Scott Hoffman; Arnold Palmer was the architect for Deacon’s Lodge; the Legacy was designed by Robert Trent Jones Jr.; and Golden Eagle was designed by former PGA Tour pro Mike Morley of North Dakota and former NHL defenseman (and ex-golf pro) Bruce McIntosh, a native Minnesotan.

“Having four of the top-eight rated public courses in the state illustrates the quality of golf on the Trail,” said Wong, a member of the Golf Writers Association of America. “Besides those four, there are other great courses in the Brainerd area that didn’t make the top 20, courses like The Pines, The Preserve, The Lakes at Ruttger’s, Whitebirch at Breezy Point and Whitefish. Without question, the Brainerd Golf Trail has the most quality courses in one area than any place in the Upper Midwest.”

For information on the Brainerd Golf Trail, call (800) 450-2838, extension 426. Brainerd is just over a two-hour drive from the Twin Cities, and the Brainerd airport is served by daily flights on Northwest Airlines. 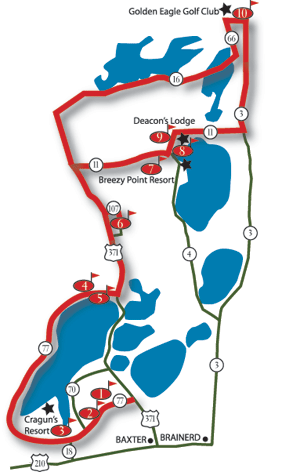